A lot of our Choir Recording sessions are booked up quite a way in advance.  Treverva Male Choir first got in touch back in June enquiring about recording an album with us.  Apparently they had previously attempted a recording with another company which had not been entirely successful.   One of the main concerns from their Musical Director, Paul Triggs, was to ensure the recording was a full ‘choral sound’ and not just a few individual voices.

Confident in our abilities to professional record choirs we accepted the challenge and headed down to Cornwall in November 2019 to record ‘One Moment in Time’ with Treverva Male Voice Choir. The recording venue was St Mary’s Church in Penzance.  Ironically the church is actually set up for recordings with some microphones already suspended from above. Although to be fair unless you are recording a large choir but don’t want to capture any detail of the accompaniment it is entirely uncertain how this set up would ever be particularly useful.

Treverva Male Voice Choir was formed in 1936 in the small Cornish village of Treverva. It was preceded by a renowned male quartet. This singing group was so popular and successful at competitive festivals that many other local men were inspired to form a choir. This led to the formation of the Treverva Male Voice Choir with the leader of the quartet, Edgar Kessell, as its MD. It was based in the small chapel in Treverva until the building was closed in 2012. The Choir is now based at “The Space”, a community hall located in the grounds of Penryn Rugby Club.

You can find out more about Treverva Male Voice Choir by visiting their website.

Some photos from the recording session with Treverva Male Voice Choir on location in Cornwall:

Recording One Moment in Time

The recording was scheduled over 2 days.  The first session was on a Friday evening starting around 6pm followed by an all day session on the Saturday.  We have found this to be quite a convenient way of recording adult choirs.  A lot of our recordings take place in Churches so that rather rules out Sundays.   By recording on a Friday evening followed by a Saturday we cater for those who are out working during the day.  It also means that choristers feel like they are only really giving over one day for the recording.   In theory, if you are free all day Saturday the chances are you can probably be free on the Friday evening without too much reorganisation.

The first challenge which faced us was a lack of parking at the church.  To be fair Paul had notified us of this hazard but suggested there should be many places nearby.  Fortunately on both days we were able to park in the streets around the church which turned out to be free during the day on Saturday as an added bonus.

In terms of the recording, as well as the choir we would be recording, Piano, Organ, Keyboard and a couple Vocal Solos and Duets.   This meant that pretty much all the recording gear needed to be set up.   Whilst we were setting up the organist arrived and proceeded upstairs to ‘warm up’ the organ.  Following our advice the choir had arranged for both the Grand Piano and the Organ in the church to be tuned!

However, it soon transpired there was a problem.  The organ had indeed been tuned just a few days beforehand.  However, whilst tuning the organ, no one had thought to fix the cyphering E.

(Music / Instruments) A defect in an organ resulting in the continuous sounding of a pipe, the key of which has not been depressed…

It also turned out that this particular E was needed in just about every piece the organ featured in… No matter, we soon discovered that in addition to the pipe organ there was also a Hauptwerk instrument (a computer based organ).  This was quickly kicked into action and we proceeded with that.

The rest of the recording session proceeded smoothly and without incident.   Throughout the session we provided Paul the opportunity to listen back to the recording (albeit in un mastered form) to confirm he was happy with the sound being captured. We always give clients the choice of listening through monitor speakers or through Headphones.  Generally headphones will give you a more balanced and ‘refined’ sound at this stage. Bearing in mind there hasn’t been any production done to the tracks while we are on location so it is essentially a collection of mono feeds just stuck together with an approximate panning to create the sense of a stereo image.

With a recording date late October and quite a lot of mastering and audio production to be done, we were on quite a tight turn around to get the CDs delivered to the choir by early December.   As Treverva ordered 500 CDs the turn around time can be up to 10 working days from the point the artwork and audio is agreed and signed off.  Fortunately we were able to hurry things along to ensure the choir took delivery at the very beginning of December. This meant they could take advantage of selling the albums at their Christmas events. 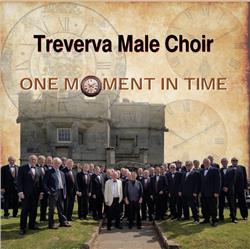 This site uses Akismet to reduce spam. Learn how your comment data is processed.

We use cookies in order to give you the best experience on our website. By continuing to browse our site, you confirm tan acceptance of this policy.Ok